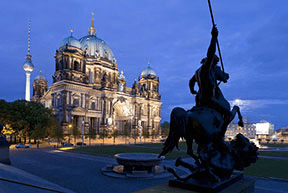 Berlin: A World City of Distinction

From 11/4 to 11/10, 2019 Berlin celebrates the 30th anniversary of the Peaceful Revolution and the fall of the Berlin Wall.
Courtesy German National Tourist Board

What does Berlin have that other world cities don’t? Well, first of all, there’s the locals, whose rough yet friendly charm is all part of the Berlin experience. Add to that an incredible array of sights that reflect not only the city’s newfound swagger but also its great history and the dramatic events of the 20th century.

When people think of Berlin, the first thing that usually comes to mind is its most famous landmark—the Brandenburg Gate. For decades a symbol of division, the monument has always been the beating heart of a major city bursting with ideas, inspiration, art, culture and creativity. Highlights in the western parts of Berlin include the Kurfürstendamm, as elegant a shopping street as you’ll find anywhere, the Kaufhaus des Westens department store (better known as KaDeWe), on-trend boutiques and exclusive galleries, as well as beautiful residential streets and, of course, Berlin’s famous nightlife.