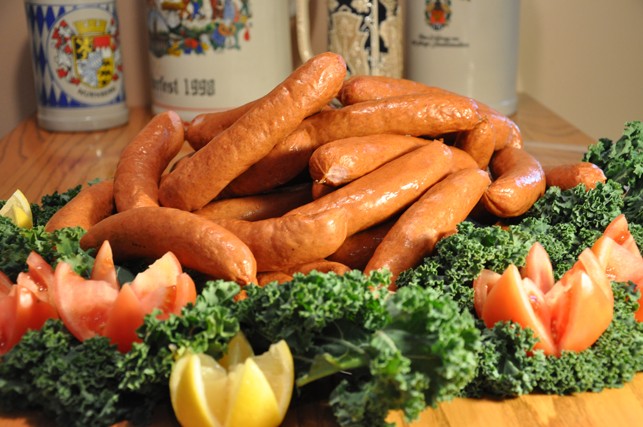 For over 41 years, The Alpine Wurst & Meat House of Honesdale, PA has manufactured German sausages, cold cuts and meats which are produced in Klaus Eifert’s tradition of making things the old German way. All recipes have been handed down in this family business. Mark Eifert, president of The Alpine Wurst & Meat House, grew up working alongside his parents, Klaus and Ingrid Eifert; traveled to Germany to learn firsthand the tools of the trade and continues to produce sausages with the utmost care.

In January 2019, The Alpine Wurst & Meat House won international recognition for their meat products at the “DFV-AAMP Quality Competition for Sausage and Ham” held in Madison, WI. The results from this competition are held in conjunction with the IFFA, the world’s largest meat industry trade fair and host of an international meat competition every three years in Frankfurt, Germany. The German Butchers’ Association (Deutscher Fleischer-Verband) formed a partnership with the American Association of Meat Processors (AAMP) to host a satellite competition which provides the opportunity for American meat processors to compete on an international level without having to leave the country.

To make the satellite event identical to the competition in Frankfurt, organizers sent judges from Germany to conduct the competition in Madison. All entries were graded on appearance, consistency, smell and taste. The competition received more than 460 entries from 42 companies across the United States.
AAMP Executive Director Chris Young said, “With an award from the German Butchers’ Association, our members demonstrate the international competitiveness and quality of their products. On behalf of AAMP and our members, we congratulate The Alpine Wurst & Meat House for their outstanding achievements.”

“Our mission is simple: to provide the best products (including bratwurst, knockwurst and kielbasa, just to name a few) and service to our customers. We take great pride in our company, our commitment to customer service and in the products we sell.” shares Mark Eifert.
Browse their online catalog at thealpineonline.com or call 570-253-5899.