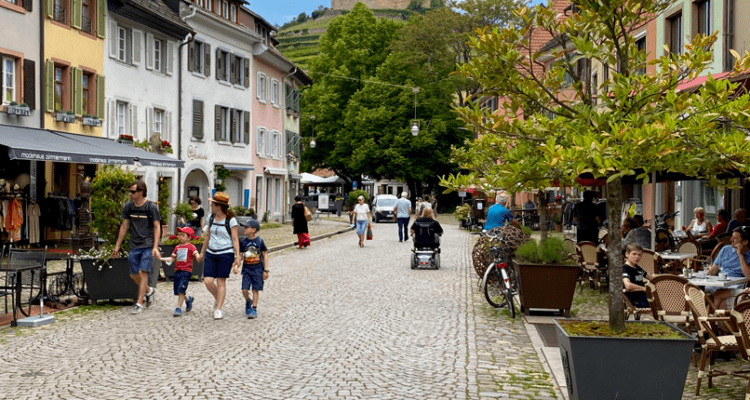 This town’s charm babbles beyond the cuckoo clock and beer stein tradition of the Black Forest.
By James Ullrich
Photographs Courtesy James Derheim

The cheery pedestrian zone’s colorful facades and cobbled streets invite me to come further. The smell of freshly baked treats persuades me to investigate more. Ambling along the main drag under the protective presence of a ruined hilltop castle, I find that there’s a lot to like about this little town called Staufen im Breisgau.

Located at the foot of Germany’s scenic Black Forest, a range of thickly wooded hills near the border of France and Switzerland, the town has existed for over two millennia though not without some intermittent drama as it was inhabited in some form or another since Roman times. Vineyards still blanket some of the surrounding hills, like many other areas settled by Roman forces. The vineyards’ product brought prosperity to the town for centuries. Silver mines later brought more prosperity and Staufen is a stop along the Camino de Santiago, as indicated by the golden seashell atop the Town Hall’s right peak. Damage was inflicted during World War II bombing raids, but the city soon recovered, enforcing a strict building code to retain its historic character. Now Staufen enjoys the prosperity afforded it by day trippers looking to lose themselves in medieval ambiance and hikers wisely choosing it as a home base from which to explore this neck of the Black Forest.