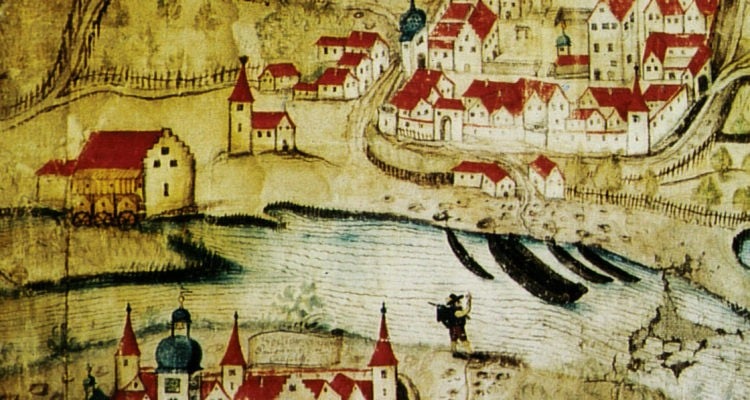 Part 1
“An Amorous Encounter with Undreamt of Consequences” (December/January 2011) was the first in a series of pieces that told the (hi-)story of my hometown in chronological order from the 1770s until the end of World War II in 1945. These articles mostly focused on how “big” events impacted the lives of people. Now the time has come to take a closer look at the daily chores and inconveniences, the challenges as well as the celebrations that defined life in pre-industrial Winterhausen. A beginning was made with an annual celebratory event, “Rules: How it shall be kept during the Shooting Competition” of Kirchweih in 1700 (October/November 2020), and following this example, we will select a primary source for each fall issue, translate it and use the text as a vehicle to show how history can be used to teach and learn about different subjects. The Main, on whose banks Winterhausen is situated, constituted one of the defining features of people’s lives. It provided a convenient means of transport for people as well as bulky materials, its fish provided food and employment, its waters ran the mill, but the river could also be an obstacle. Bridges were few and far in-between and a Furt (ford)— where swine, oxen, or a Franke (a member of the tribal group living in the area) could safely cross the river on horseback—were used. Occasionally the depth of the water at a ford provided the name for the town that sprang up near it, viz. Schweinfurt, Ochsenfurt or Frankfurt. Where fords were not available, ferries provided the means to cross the river more or less safely. The earliest mention of a ferry in Winterhausen dates only to 1359, the earliest rules and regulations that survive date to 1446. Our document shares the revised rules of 1 September 1626, but we shall refer to the earlier version to point out changes, few as they are, in the days where change came much slower than in our fast-paced age.