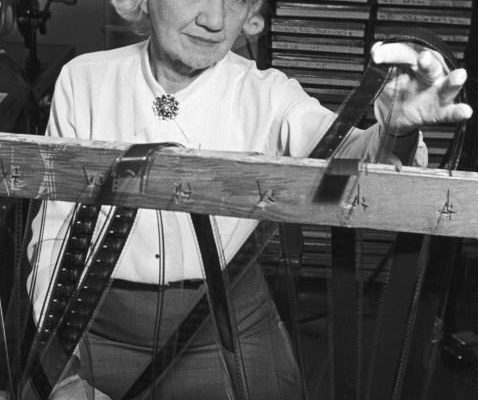 Anne Bauchens
(February 2, 1881/1882 – May 7, 1967)
Anne Bauchens was what was known at the time as a film cutter, now called a film editor. She was the first woman to win an Academy Award for her work. Her father, Otto Bauchens, was a German-American and worked as a railway porter. Her mother was Luella McKee Bauchens, and the family, consisting of the parents, Anne and one brother lived in St. Louis, Missouri. Anne took an interest in the theater and as a young woman studied dance, gymnastics and drama while working as a telephone operator for the St. Louis Post-Dispatch. Deciding to try her luck on the stage, she moved to New York City at the age of twenty. To support herself she took a job as a secretary at a real estate company. While the acting parts never materialized, Anne stayed in New York. When the real estate firm folded, she found employment working for the playwright William C. DeMille. This connection would ultimately change her life and lead her into the film industry, albeit in a different, but ultimately equally fulfilling, form of creativity.