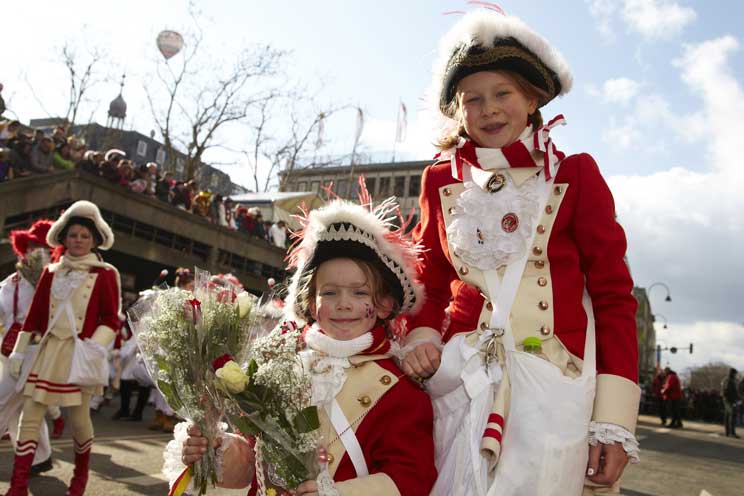 Carnival in Cologne—A Guide to the “Crazy Days”

A handful of tips on how to get the most out of Cologne’s “fifth season” from the people who know best.

Every year, many visitors travel to Cologne for Carnival. If you’re not a native of Cologne, you don’t have to study a book of carnival etiquette to participate in this cheerful celebration. But it’s certainly helpful to know a few “rules of the game” so that you won’t leave Cologne in disappointment because the “crazy days” haven’t met your expectations.

Cologne’s Carnival is as old as the history of the city itself, and its current incarnation began more than 190 years ago. The ancient Greeks and Romans celebrated joyous spring festivals in honor of Dionysus and Saturn. Similarly, the ancient Germans celebrated the winter solstice and ritually drove out the evil demons of winter. In later times, the Christians adopted these heathen customs. The period of fasting before Easter, or Lent, was preceded by Fastnacht or Carnival (in Latin, “carne vale” means “goodbye, meat”). In the Middle Ages, the Carnival celebrations, also known as “mummery,” often became a scene of riotous dissipation. Rules and restrictions were fairly ineffective, and the wild and exuberant celebrations continued unabated. In the 18th century the jolly street carnival was joined by the “redoutes”—gala masked balls copied from the Venetian model, which were initially reserved for aristocrats and wealthy merchants. Later on, neither the troops of the French Revolution nor the sober Prussians could keep the people of Cologne from continuing their Carnival traditions.