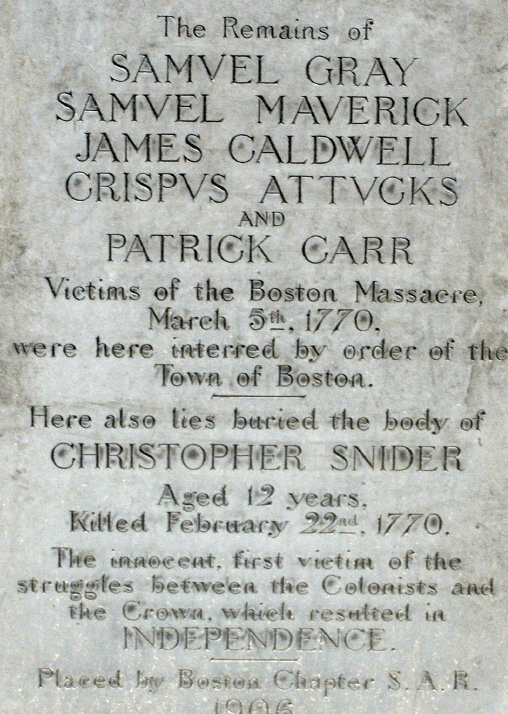 22 February 1770: Christopher Seider becomes the first (German-) American “martyr to the noble cause”

“Große Ereignisse werfen ihre Schatten voraus,“ says a German proverb: “Great events cast their shadows ahead”. Though they are still ten or more years away, the years from 2020 to at least 2033 will indeed be filled with numerous “great events” that are already casting their long shadows. The “great events” are of course the festivities commemorating the 250th anniversaries of that “noble cause” the American Revolution and the American War of Independence. Preparations are well on their way: in July 2016 the Federal government established a Semiquincentennial Commission, and the National Park Service, just recently appointed former Director of the National Park Service (Acting) P. Daniel Smith as Senior Advisor to the Director of the NPS to coordinate events for the 250th Anniversary of the Declaration of Independence. On the state level, to name but one example, the New Jersey Historical Commission and the Crossroads of the American Revolution National Heritage Area, a federally designated unit of the NPS stretching over portions of fourteen counties in New Jersey, formed a public-private partnership in October 2019 to get their state ready for the big day. “RW250, Revolutionary Westchester“ County just north of New York City, proclaims on its website that it “strive[s] to build awareness and excitement for the events, places, ideas and people—both the unsung and the famous—of the Revolutionary War period in Westchester County” (https://rw250.org/), while W3R-US, the Friends’ Group to the National Park Service for the Washington-Rochambeau Revolutionary Route National Historic Trail (WaRo in NPS parlance), is discussing plans to commemorate, maybe even recreate, the 1781 March to Victory from Newport, Rhode Island, and Newburgh, New York, to Yorktown, Virginia. (www.w3r-us.org)