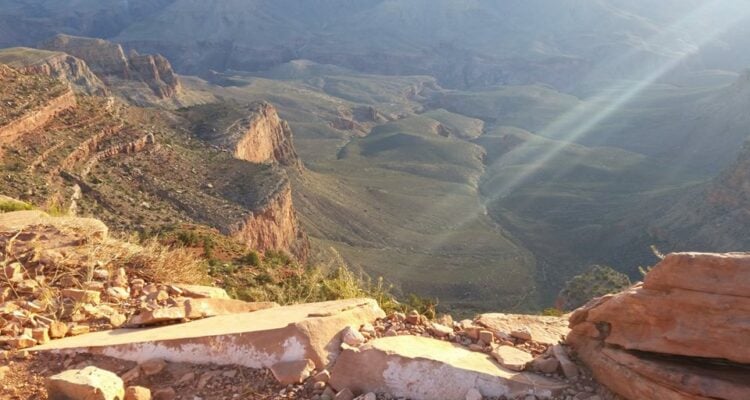 Alpine Hiking in the Grand Canyon

Some time ago I was alerted to a poem (original in the German text) by Bavarian author Franz Ringseis:
Something by Lao-Tse
“Water can outdo a rock!”
Lao-Tse once said,
two-and-a-half-thousand years ago.
Wow, he would’ve been happy,
had he seen the Grand Canyon!
“There you have it!” he would’ve said.

The author is one of many German tourists who visited the U.S. to experience the awe-inspiring view of the unique Arizona landscape where the Colorado river cuts deep into the Colorado Plateau. This vast erosion attracts millions of worldwide visitors and often inspires them to write, to paint, and even to create music about their experience. Franz Ringseis (a nom de plume for the Munich university professor of philosophy Anton Neuhaeusler (1919-1997)) once traveled the U.S. and wrote a book of Bavarian poetry about his experiences, with one section titled “Let’s go to the Grand Canyon”. We find several poems of his therein celebrating, admiring, and introducing this unique geographic site within a narrative framework that includes the Chinese philosopher Lao-Tse. Ringseis’ lines capture the experiences of many European—particularly German, Swiss, and Austrian—travelers who are fascinated by and want to experience the Grand Canyon in person. Many are satisfied with a car ride to capture the breathtaking view from the top while others want to hike all or part way down into the canyon. That is where Alpine hiking comes in, because it is not an easy undertaking despite all its rewarding sight offerings. Walking down to the river is easier than climbing back up again. Some people stay in the deep valley over night or for a few days, mostly to partake in an unforgettable rafting trip or just to amble along the riverbanks. On the way down they would observe the layers of several hundred million years of sediments, evidence of a long era of the land being covered by the sea. At the bottom they may even recognize the lowest level as the so-called metamorphic basement rocks. Others may simply appreciate the mighty appearance of the nature that surrounds them.