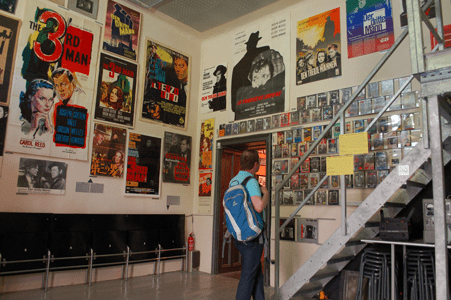 The Third Man—Walking in the Steps of a Film Classic

What is it about this nearly forgotten film that has fans and tourists roaming the streets and sewers of Vienna?

I glanced at the middle-aged British woman next to me as our tour group edged closer to the Vienna sewers entrance. “Is this a good idea?” I asked her. She shrugged. “We’ll find out.” I took a deep breath, tugged at my safety helmet strap and shook my head. While thousands of tourists were happily exploring Vienna’s elegant museums, shops and coffeehouses, I was exploring Vienna’s dank sewers, questioning my common sense, feeling as foolish as a freshman.

Why Vienna’s sewers? Well, a few days earlier, I’d attended The Third Man movie at Vienna’s independent Burg Kino Theater, which regularly screens the 1949 British film noir classic. As I watched, I remembered how much I’d liked the movie as a small boy—especially the zither music. I enjoyed it even more this time. Set in bombed out, occupied, post-World War II Vienna, the movie traces the attempt of American pulp novelist Holly Martins (Joseph Cotten) to clear the name of his deceased friend Harry Lime (Orson Welles). Only Lime turns up as a very-much-alive, lethal, black market crook. Dramatic chase scenes were filmed in Vienna’s sewers. After watching the movie, I walked out of the theater alongside a senior British couple. “We’re Orson Welles fans,” they told me. “So we really liked the movie!” I later read that The Third Man has been voted among the greatest films of all time. Vienna, I learned, is very much linked with The Third Man movie, which has even sparked a local boutique tourist industry.

I decided to join, signing up for a “Vienna in the Footsteps of the Third Man Tour” (above ground). Christopher Timmermann, from a family of Vienna tour guide/historians, greeted me at the Stadtpark subway station by whistling The Third Man theme. Fellow tour members included a German, an ex-military man who’s a big fan of the movie, a Scot who likes old movies and Orson Welles and a Munich man who likes the music.