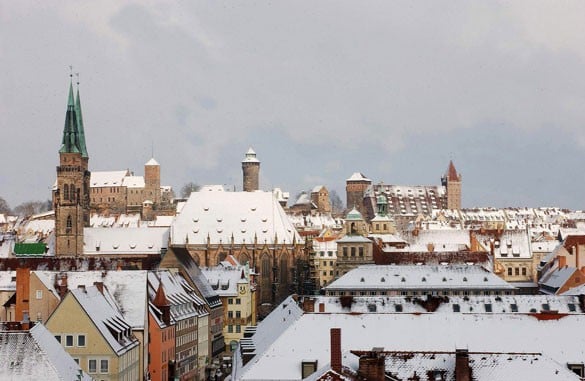 One of my favorite childhood books was The Toys of Nuremberg. It was written in verse by an American, Lillian Baker Sturges, in 1913. In it, Jumping Jacks and ducks on wheels, Humpty Dumpties, sailor dolls and many others—all made in Nuremberg—had grown tired of sitting on shelves and not being sold. One night, they climbed down from their shelves and marched through the city’s crooked, narrow streets in protest at having been left behind. For 600 years, Nuremberg had been the leading German toy center.

I never tired of admiring the pictures in the book and wishing that I could provide a home for those lonesome toys. I didn’t know then how far away across an ocean and in a different country, the toys were. I’m sure I would have been just as interested, too—had I known that it existed—in climbing up the Imperial Castle’s Sinwell Tower, set high on a sandstone rock overlooking the city. At that time, Nuremberg still had its castle and Altstadt (Old Town).

But in January, 1945, a British bombing raid destroyed 90 percent of its 16th century pink and gold half-timbered dwellings. For centuries, this Bavarian walled city (although inhabitants consider themselves more Franconian than Bavarian) had been renowned not only for its toys, but for its architecture, art and culture. Sadly, in the years of rising National Socialism before World War II, Nuremberg lost its cultural luster. It became known, instead, as a favorite city of Adolf Hitler’s and as the site of Nazi (National Socialist) Party rallies. The Nuremberg Laws depriving German Jews of their citizenship and forbidding marriage between Christians and Jews, were promulgated in the city that bears their name. A violently anti–Semitic newspaper was published in the city. At the war’s end, Nuremberg became the site of the trials of the Nazi war criminals.