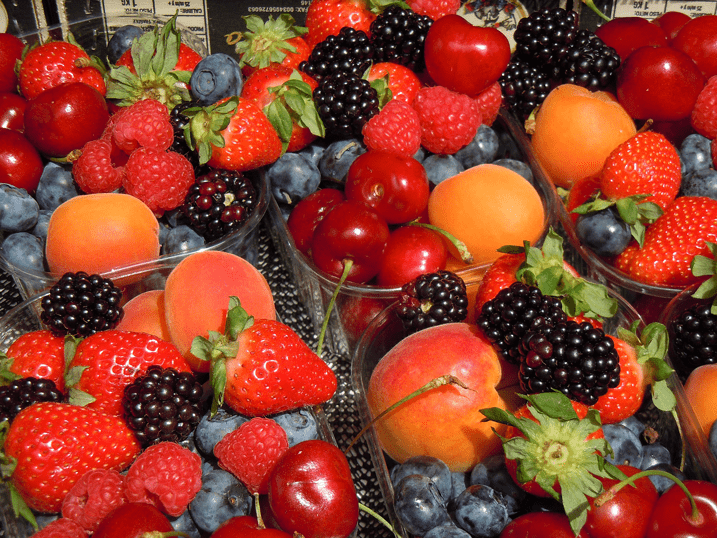 Chill Out with Cool Summer Soups

Summer is prime time for all those luscious fruits and berries that bring their bright colors and heady aromas to roadside stands, open-air markets, and the produce sections of grocery stores. Those bounties of the season are delicious to eat fresh from the orchard or field, or baked into pies and cobblers, or frozen into ice creams and sorbets. But did you know they can also be made into refreshing cold soups that are perfect for summer weather?

If the thought of eating a chilled soup leaves you cold, think again. Chilled soups have been popular in the Germanic countries for centuries. Known as Fruchtsuppen or Fruchtkaltschalen in German, these fruity-berry soups have been eaten in Central and Northern Europe ever since the first country cook discovered that she could make a simple, yet tasty and nourishing dish from ingredients that were readily available on the farm: wild or cultivated fruits and berries, dairy products such as buttermilk and sour cream, and other flavorings such as spices and wine.
By the early 18th century, fruit and berry soups (both hot and cold) had made their way from humble farmhouse fare to the tables of middle-class burghers. In peasant homes, these soups could be served at any time of the day—for breakfast, as a mid-morning snack, for lunch, or as the evening meal, with some bread and sliced cold cuts of meat on the side. In bourgeois households, however, they were often served as the first course of a main meal and, for more elaborate repasts, as a palate cleanser between courses or even as a dessert.

Cold soups were made in summer and early autumn with whatever fruits or berries were at their peak of ripeness: apples, bilberries, blueberries, elderberries, strawberries, raspberries, cherries, plums. Chilled soups were often garnished with sweet or sour cream, herbs such as mint, and even tiny almond macaroons for dessert soups.

Following are six recipes for German cold fruit or berry soups, some made with fresh ingredients, others with canned or frozen ones. Some are simply pureéd in a blender (like today’s smoothies), then chilled—whereas others are cooked first, cooled to room temperature, and chilled. Whatever the method, these soups are as pleasing to your eyes as to your taste buds. Enjoy them like Europeans do: served in large wine glasses as an elegant first course for a special meal, or in pretty bowls as a colorful and cooling dessert. Guten Appetit!