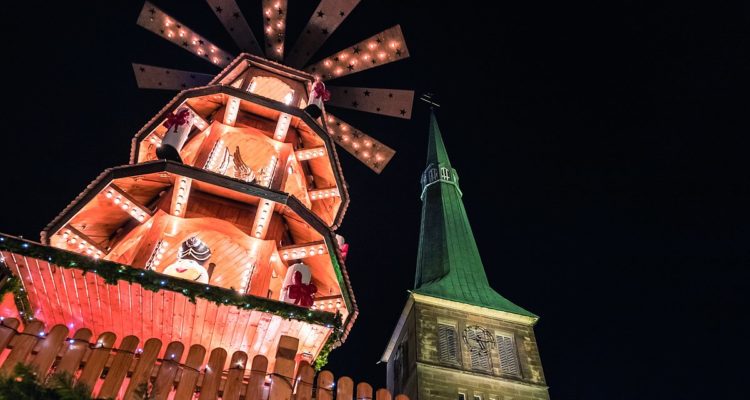 In Praise of Christmas Pyramids

What would Christmas be without my Weihnachtspyramide?
By Leah Larkin • Photographs Courtesy Leah Larkin

Many, many years ago—one of my first Christmases in Germany—a German boyfriend gave me a Christmas Pyramid. The relationship did not last, but the pyramid did. I treasure it, carefully dismantle it and wrap it in shredded fabric before packing it away every year, so it stays safe and can be honored with a prominent place amidst my holiday décor.

The flickering candle flames, the turning blades set in motion by the heat of the candles, the tiny Nativity figures moving ‘round and ‘round—for me, it’s the magic of Christmas. Never mind that age has tarnished my treasure. The blades have been scorched by the candle flames. One broke. The figures rarely move any more, but it’s still German Christmas. And no one does Christmas like the Germans.

As Kathy, a friend from my days in Germany, said, “I have a Christmas pyramid. I love getting it out for Christmas. It makes me think of Advent in Germany—which was so much better than in America…there just seemed to be less commercialism.”