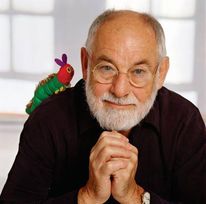 Eric Carle (June 25, 1929 – May 23, 2021)
Beloved children’s author and illustrator, Eric Carle’s life as a German-American spans both continents. Born in Syracuse, New York, he spent much of his childhood and youth in Germany. His father Erich Carle was a would-be artist, who settled for a job spray painting washing machines in the U.S. He taught his young son to love nature and their walks together often involved searching out the smaller animals and insects, hiding under rocks or logs or behind tree bark. His mother, Johanna Oelschlaeger Carle, grew homesick and the family made the fateful decision to return to Germany in 1934. They settled back in Stuttgart and ended up spending World War II there. Carle resented the strict, regimented schooling, and of course his father was drafted in 1939. Eric would be sent to the countryside in Schwenningen to escape the bombings, and when he was 15, he was forced to dig trenches on the Siegfried Line, together with other German teenagers and Russian prisoners of war. He hid in cellars during bombings and was once fired on when washing his mess kit in a river. He remembered the war years as dark and bleak, with no color.