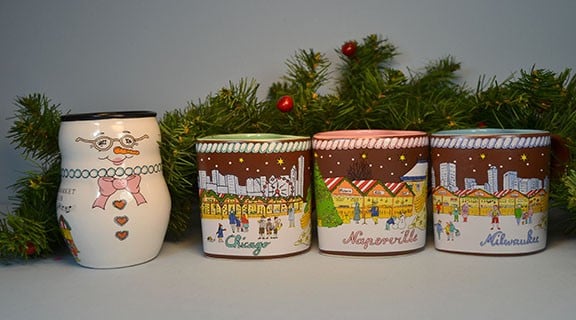 Along with the Christkindlmarket in suburban Naperville, which opened in 2016, a total of three locations now offer the traditional German Christmas market experience to northern Illinois and southern Wisconsin shoppers.

With this new location in mind, the event organizers have creatively capitalized on the popularity of the collectible Glühwein mugs by offering a set of unique but similar mugs from all three locations in one attractive package with a carrying handle.  Each heart-shaped mug has a different interior color and a design unique to its location:  Chicago’s mug features the Picasso sculpture in Daley Plaza, the Willis Tower building, and the Ferris Wheel on Navy Pier within the Chicago skyline. Naperville’s mug shows its famous Moser Tower housing the Millennium Carillon along the Naperville River Walk and historic buildings from the Naper Settlement, where the Christkindlmarket is located. Milwaukee’s mug has the Fiserv Forum, where the Milwaukee Bucks play, behind a city skyline.

But let’s back up to the beginning of this collector’s market phenomena, when Glühwein was first offered in a reusable cup in Nürnberg, Germany. In 1990 the Bavarian state government banned disposable cups at Christmas markets, prompting Nürnberg to order 100,000 simple brown mugs with a Nürnberg logo.  The mugs sold out after the first weekend of the Christkindlmarkt.  Since then German markets have offered a variety of designs—some unique to their town, some with generic winter themes, some dated and some undated.  Most mugs can be returned for a deposit if the buyer doesn’t want to keep it, but many are kept as inexpensive souvenirs.

Chicago’s Christkindlmarket is fashioned after the famous one in Nürnberg, complete with its own Christkind to open the market and visit with the children.

Its entry into the Glühwein mug collector’s market came slowly, however.  An undated, unremarkable, green traditional “Chicago Christkindlmarket” mug was offered for the first three years of the market’s existence, from 1996 through 1998.  The following mugs were dated, making them more collectible. But the first boot-shaped mug in 2005 captured the hearts of Christmas market patrons.  Several years of boot mugs followed, prompting many to assume the Chicago mugs would always be boots.  With so many design possibilities available, Chicago wisely chose new patented designs each year, to the dismay of the boot-lovers.

When Chicago’s Christkindlmarket expanded to other locations (suburban Oakbrook for a few years, then to suburban Naperville in 2016 at their historic Naper Settlement, and in 2017 to the Park at Wrigley Field, where the Chicago Cubs play),  unique mugs were sold at each one, increasing the buying opportunities for mug collectors.

Five years ago Chicago also began offering a snowman-shaped mug for children’s hot chocolate, as part of their Kinder Club program.  Each year a new, unique snowman is added to the snowman family: the first (Dad) had a red scarf; the second (Mom) had rosy cheeks, feminine eyelashes and a blue-and-white-striped scarf with the four stars of the Chicago flag; the third had a blue scarf with white snowflakes and a colorful Laterne (Brother, all ready for the Laterne parade).  Last year’s snowman was Opa (Grandpa with a plaid scarf, glasses and newspaper tucked under his arm) and this year’s is Oma (Grandma, wearing pearls and glasses, and carrying a bag of knitting, chocolate and a candy cane). The colors on the Oma mug all coordinate with the interior of the three heart-shaped mugs.   As you can see, lots of thought goes into these clever designs.

The process of selecting a new mug each year begins in February, with a team of designers in Germany working with the Chicago’s German-American Events staff.  The final design decision and order is completed by late spring, which was a challenge this year because the Milwaukee location was finalized so late in the year, after the Christkindlmarket in the Park at Wrigley was not renewed due to construction at the park. Although the design for the Wrigley Field mug was already complete, last minute adjustments replaced the illustration for Wrigley Field with Milwaukee’s Fiserv Forum, as well as the street sign with “Clark and Addison,” the famous location of the ballpark, with flagpoles flying the United States and German flags.

The collector’s market for Chicago’s mugs has grown to the point that Chicago is Germany’s largest customer for mugs, outpacing the Christmas markets in Europe.  How can that be?  One explanation is that many visitors to the European Christmas Markets chose to return their mugs for the deposit instead of keeping them each year.