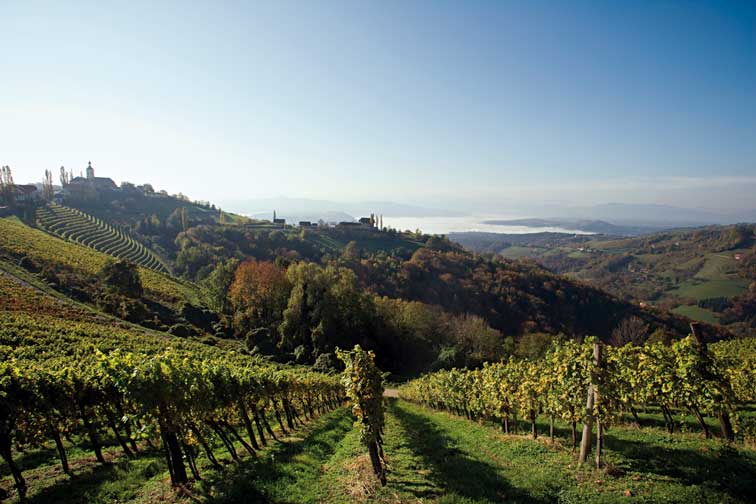 Transcending Borders: A Little Piece of Paradise on the South Styrian Wine Road

“Black Gold,” beautiful vineyards and a wide variety of delicious wines combine with gorgeous landscapes on the Austrian/Slovenian border.

“We’re so proud of our region, we don’t need any comparisons,” says my guide, Ursula Lechenauer, with a broad smile as we take in the magnificent landscape around us. As far as the eye can see, green and golden yellow vines bask in the warmth of the early autumnal sunshine, while winding roads lined with poplar and chestnut trees curve their way through a myriad of rolling, undulating hills. Yet despite some striking similarities, this is not Tuscany but the idyllic wine region of South Styria, just a 40-minute drive from Graz, Austria’s second-largest city.

We’ve stopped by the side of the picture-perfect Südsteirische Weinstrasse (South Styrian Wine Road), which meanders 25 kilometers (15-1/2 miles) from Ehrenhausen to Leutschach through Austria’s southernmost winegrowing area. At times it weaves into Slovenian territory—a tenth of it runs directly along the Slovenian border—but apart from the odd street sign and road marking, visitors could be forgiven for not being aware of this. Ursula points to a number of wooden windmills scattered throughout the countryside: “The symbol of our region is the Klapotetz,” she explains. “They were originally built to scare away the birds from the ripened grapes. If ever you want to know if you’re in Austria or Slovenia, count the number of blades on it. If there are eight, you’re in Austria. If there are six, you’ve crossed the border. It’s as simple as that!”