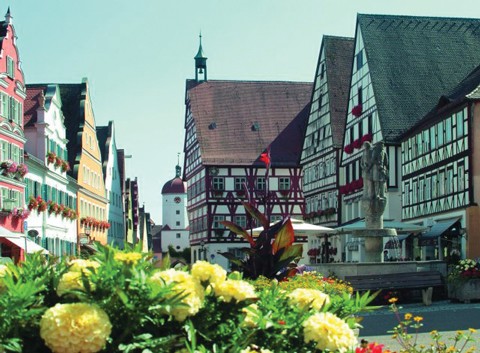 The universe gave the region its unique topography and two ruling dynasties have given this quaint town two distinctive faces.

“Seyd gegrüßt ob nah, ob fern!” announced the herald in medieval German (it means something like “be greeted whether near or far”) at the opening of the historical market right at the heart of the Old Town in the Bavarian town of Oettingen. Just for a short moment, this scene reminded me slightly of the opening ceremony for the famous Chriskindlesmarkt in Nuremberg, when the Christkind recites her festive prologue—which is certainly much longer than the one I’ve just heard. And similarly to the spectacular opening of the Chriskindlesmarkt, which takes place on the Friday before the first Sunday in Advent, the opening of the historical market in Oettingen takes place on a Friday too, but in May. The festivities last only three days—but what days these are! For an entire weekend, starting with the so-called “Night of the Fools” the former “residenz city“ is turned into one terrific backdrop for innumerable craftsmen displaying and selling their artistic goods at the market stalls scattered all over the old town. It is the night of minstrels, jugglers, street musicians, witches, magicians and imaginary creatures which carry out their dreadful deeds while courageous knights and men of nobility compete in the tournament in the courtyard.