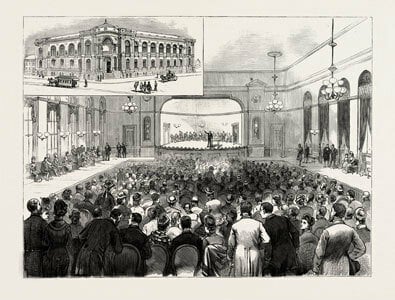 In June of 2020, the St. Louis Liederkranz will mark a milestone reached by few singing organizations. We will be celebrating 150 years of bringing the love of German folk songs and the music of our immigrant ancestors to their new homeland of America.

Founded in 1870, the Liederkranz was considered one of the most exclusive venues among German-Americans in St. Louis. During the social season, the club sponsored a semi-monthly ball. The St. Louis German press printed glowing reports of these events, complete with the names of the most socially prominent in attendance and descriptions of the women’s beautiful gowns. Considered one of the most socially acceptable clubs for the more affluent St. Louis German-Americans, the Liederkranz was first only open to professional men. The group first met in a grand hall in downtown St. Louis, until our own building was built in 1907 in south St. Louis City.

According to members, the new building, also known as the Alhambra Grotto, housed game rooms, private and public meeting space, a Rathskellar, several dining rooms (with kitchens), bowling alleys, and both concert and dining halls. It also included a rehearsal hall, musical library and director’s room.

In the early part of the 20th century, the club had grown to more than 1,000 members, including a full orchestra. Unfortunately, the United States entered into two World Wars, and Germany was one of their adversaries. German sentiment changed in the U.S. during these difficult times of war, and the effects were felt by all German-American organizations.