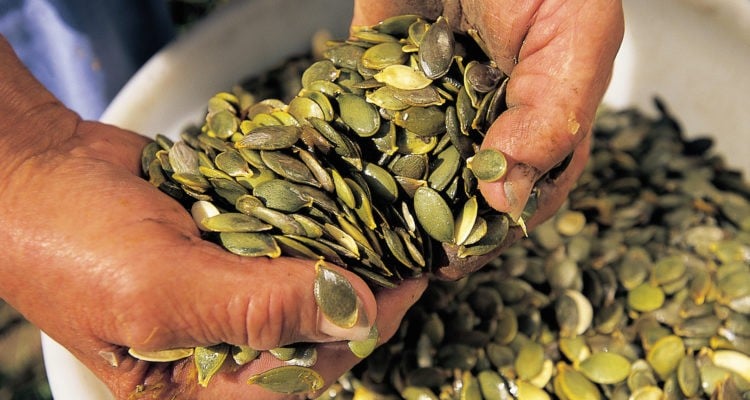 Kürbiskernöl The “Green Gold of Austria”

Styrian pumpkin seed oil is an Austria delicacy noted for its extraordinary taste and quality.
By Leah Larkin

Klaus and Eva hail from Graz, the capital of Styria (Steiermark), a region of southeastern Austria. They liked to vacation in France and came to spend a month every summer in the rental apartment that was part of our house in the Luberon area of Provence. They both liked to cook—outdoor grilling was a Klaus favorite. They always invited us for one of their home cooked meals, introducing us to a salad with pumpkin seed oil. We were hooked.

Pumpkin seed oil, Kürbiskernöl (the “green gold of Austria”), is used primarily with food, but also has medicinal merit. The dark green oil (almost black) has a nutty taste and is bursting with flavor. It has long been a favorite in Austria where it is used on salads, in soups, egg dishes, even ice cream and cake. Soft scrambled eggs doused with the oil is a classic pumpkin oil dish in the country.

But the wonders of this luscious oil have been discovered far beyond the Austrian borders. Years ago the noted food writer Mimi Sheraton touted the elixir in her book 1,000 Food to Eat before You Die. “With a glow that suggests liquid amethysts,” she wrote, the oil “lends a warm nuttiness to many dishes, simultaneously tinting them with an inky sheen that may discourage the uninitiated”. One writer even likened the appearance to “motor oil”. I would not be that harsh, but it is different.