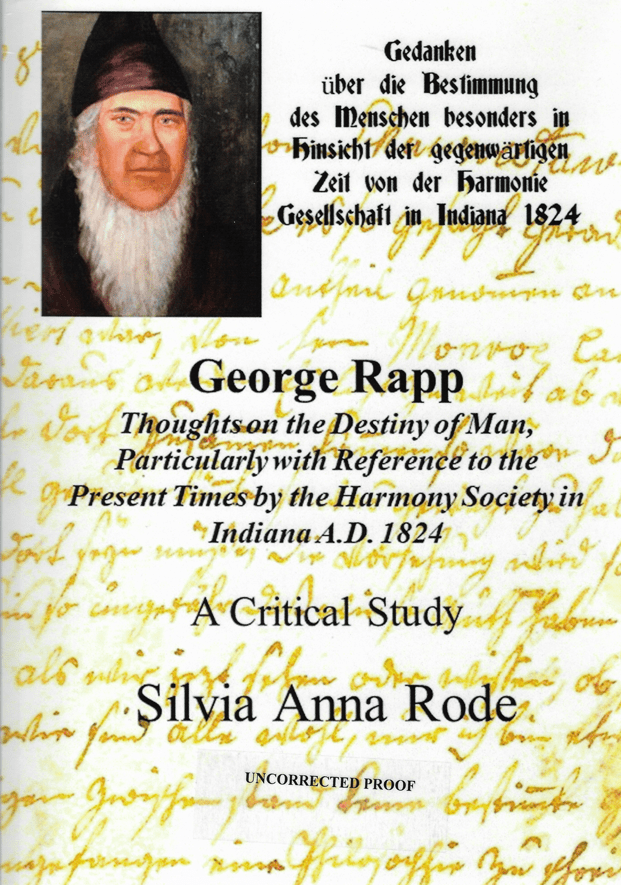 Buchnotizen/Book Notes provides brief comments on recent books relating to German and German-American topics. Information as to price and ordering can be found at various Internet book sites, or at the nearest bookstore.

ommunitarian settlements established by German sectarian groups form an interesting chapter in German-American religious life. One of the most interesting was the Harmony Society founded by George Rapp (1757-1847). Claiming he was a Christian prophet, but one whose views did not conform with the established church, he left his home in Iptingen in the Kingdom of Württemberg in 1803. In America, he founded three settlements that spanned a century: Harmony, Pennsylvania (1805-15), New Harmony, Indiana (1815-25), and Economy, Pennsylvania (1825-1905). With as many as eight hundred members, the Harmony Society engaged in agriculture and various trades, making it an economically successful enterprise.

In 1824, the Harmony Society published a German-language treatise by Rapp, as well as an English translation. Both of these works are now available with Silvia Anna Rode’s George Rapp: Thoughts on the Destiny of Man, Particularly with Reference to the Present Times by the Harmony Society in Indiana A.D. 1824: A Critical Study (Max Kade German-American Center, Indiana University-Purdue University, 2018). It aims “to preserve an important piece of German-American communal history and to provide a scholarly analysis thereof.” In addition to the original German and English texts, the author includes a new translation aimed at getting closer to the original German.