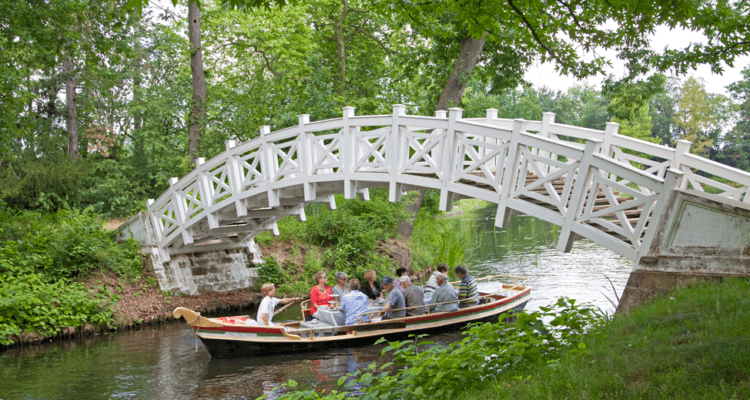 The landscape became an architectural encyclopedia of design from ancient times to the latest developments.
By Mary Beth Strickler

Surely Duke Leopold III Friedrich Franz von Anhalt-Dessau (1740-1817) and his friend, architect and master builder Friedrich Wilhelm von Erdmannsdorff (1736-1800) did not foresee that their late 18th century project would become one of the most outstanding monuments of gardening and landscaping in Europe. Inspired by sights from Duke Leopold III’s Grand Tour of Italy, the Netherlands, England, France, and Switzerland, and influenced by ideals of The Age of Enlightenment, the two men aimed to move away from the formal garden concept of the Baroque era in favor of a naturalistic landscape such as the ones at Stourhead Gardens, England and Ermenonville, France. Over a forty-year period, a network of visual and stylistic design elements incorporating the philosophy of Jean-Jacques Rousseau (1712-1778), the thinking of Johann Joachim Winckelmann (1717-1768) and the aesthetics of Johann Georg Sulzer (1720-1779) went beyond the mere copying of garden scenery and building from other sites to create the garden realm that the World Heritage Centre deemed in 2000 as holding “Outstanding Universal Value”. Today, the cultural landscape of the Dessau-Wörlitz Garden Realm encompasses an area of 142 km2 (55 mi2) within the Middle Elbe Biosphere Reserve, part of the UNESCO “Men and Biosphere” (MAB) program, in the German state of Saxony-Anhalt.

Celebrating the 20th anniversary (“20 + 1” as the milestone celebration will occur in 2021) of being named a UNESCO World Heritage site, the Garden Realm is situated between Lutherstadt Wittenberg and the Bauhaus city of Dessau (two other UNESCO World Heritage sites) about an hour’s drive south of Berlin. According to the trust foundation Kulturstiftung Dessau-Wörlitz, there’s nowhere else in the world that a density of World Heritage sites can be experienced within a radius of just 35 km (21.75 mi). The garden grounds were divided into four parts by the construction of a railway line and the Bundersautobahn 9 in the 1930s. Ongoing restoration of the external and internal buildings and monuments continues.