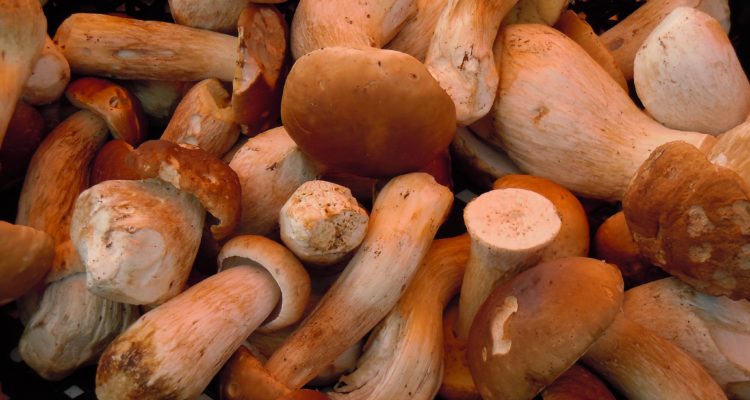 A Halloween cartoon in The New Yorker magazine showed two witches stirring a bubbling brew in a big iron cauldron over an open fire. One witch says to the other, “If you don’t have any small children, you can substitute mushrooms.”

Well, mushrooms can’t be substituted for many ingredients, but they do add texture and depth of flavor to the dishes they’re used in. Mushrooms are rich in umami—that sixth flavor receptor on our tongue—which gives a meaty, somewhat earthy taste to anything containing those edible fungi. (The other five taste receptors are sweet, sour, salty, spicy, and bitter.)

Spring, summer, fall—each season brings its own crop of mushrooms (Pilze) to the forests and fields of Germany. Depending on the time of year, German markets offer a variety of fresh mushrooms, sometimes a dozen or more, both wild and cultivated, in a palette of earth-tone colors from white, ivory, and beige to brown, orange, and black. In addition, a few kinds of cultivated mushrooms, as well as dried mushrooms, are available year-round.