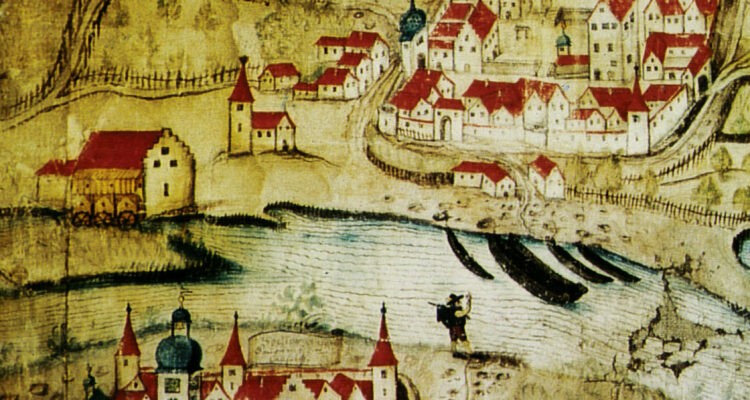 Rules Concerning the Ferry in Winterhausen, 1 September 1626 Part 2
By Robert A. Selig

n our October/November 2021 issue we introduced you, our readers, to the daily chores, the challenges, and the celebrations that defined life in Winterhausen, a small pre-industrial village of a few hundred inhabitants. Winterhausen lies just a few miles south of Würzburg on the banks of the Main River which constituted, and to some extent still constitutes, a defining feature of those villagers’ lives. For centuries it provided a convenient means of transportation for people as well as materials and merchandise, its fish provided food and employment to fishermen, its waters ran the local mill. But the river could also be an obstacle that needed to be crossed. Bridges were few and far in-between and whenever possible a ford was used to cross over. Where neither fords nor bridges were available, ferries provided the means to pass across. The earliest mention of a ferry in Winterhausen dates to 1359, and the earliest known rules and regulations to 23 September 1446. Last year we looked at the first seven points of the revised rules of 1 September 1626, which had been compiled following complaints of the subjects of “Georg, Lord at Limpurg, Hereditary Imperial Cup Bearer of the Holy Roman Empire and Semperfrey” about “Urban Schwenkhert, the current holder of the ferry, concerning diverse shortcomings, laziness and negligence in crossing as well as about increased fares and the taking across”. The single most important complaint had been that Schwenkhert had unilaterally raised the ferry fees and justified his actions “in ansehung Jetziger hoch beschwerlichen teuren Zeit (in view of these current highly dear times)”. This is a reference to the Thirty Years’ War, which had started a few years earlier in Prague in 1618, but whose impact was already felt across the “Holy Roman Empire of the German Nation”. In 1626, active fighting occurred in an arc ranging from Kassel to Leipzig and Berlin, but barely five years later the villages along the Main would be devastated by a Swedish army under King Gustavus Adolphus I of Sweden. The first seven points of the rules of 1626 defined the rights and obligations of the ferryman toward Georg, Lord at Limpurg, and the villages of Winterhausen and Sommerhausen on either side of the river. The remaining three points set the fees for transporting goods up and down the river from Ochsenfurt to Würzburg as well as across the river between the two villages.