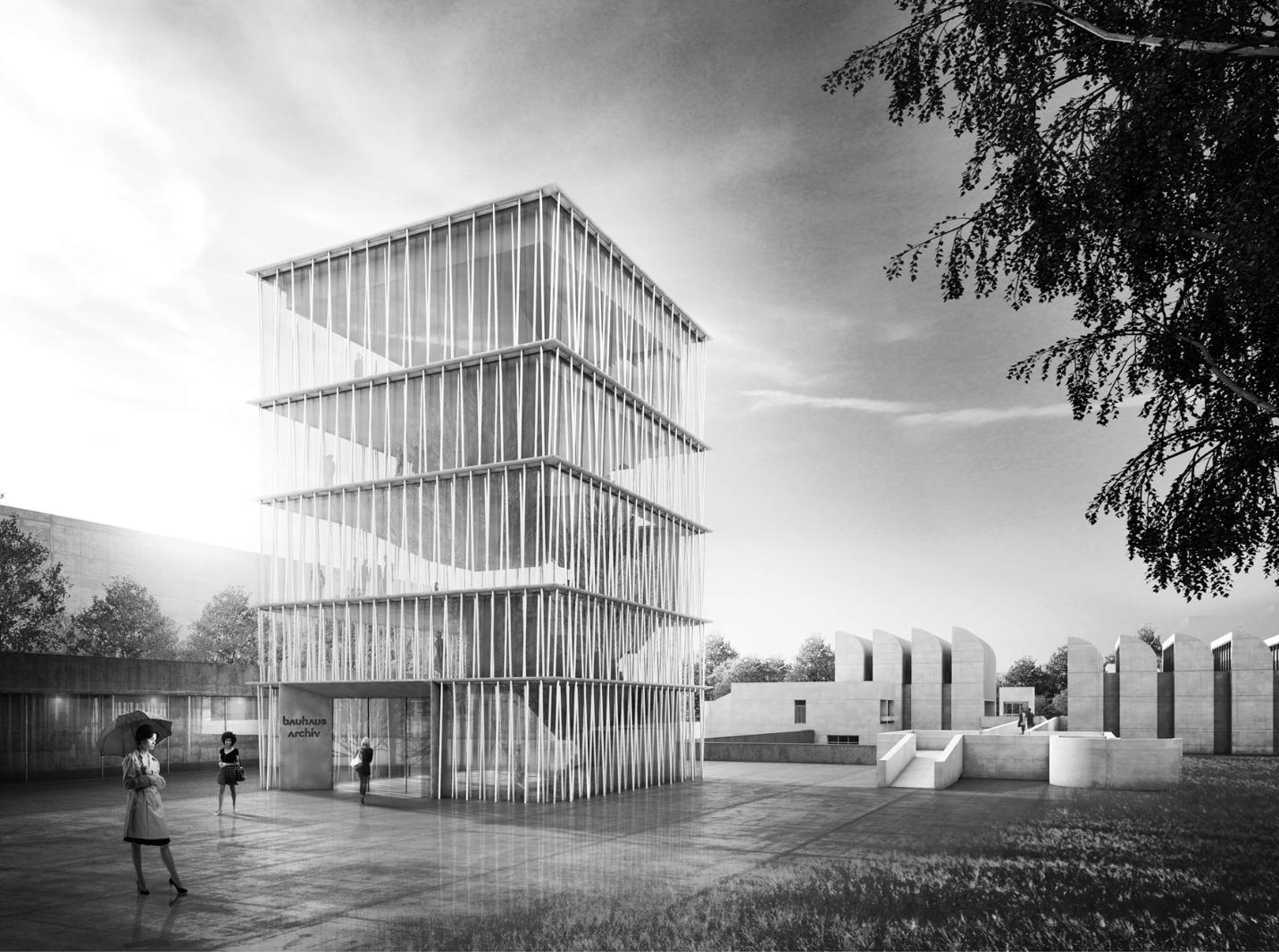 Bauhaus at 100—Spaces for the 21st Century

Three new museums are being built—in Weimar, Dessau, and Berlin—for the Bauhaus Centenary. In the future, they will present a vivid narrative of Bauhaus history, with objects that have never been on display. The new buildings will create desperately-needed space to present the unique collections of the Bauhaus institutions in a contemporary manner. But they will also be places to gather, cultural centers, educational laboratories and event venues.
The Bauhaus-Archiv / Museum für Gestaltung Berlin, the Bauhaus Foundation Dessau, and the Bauhaus Museum of the Klassik Stiftung Weimar have long since reached the limits of their spatial capacity due to the increasing number of visitors, growing holdings, and the new demands of contemporary museum work. In the coming years, a total of more than 6,500 square meters (ca. 70,000 square feet) of exhibition space will be built at the three Bauhaus locations, as well as space for events, cultural education, catering and museum shops on more than 12,000 square meters (ca. 129,000 square feet). The new museums will create new city spaces—at the locations key to the influence of Bauhaus.

Bauhaus Museum Weimar – A New Quarter for Modernism
The new building for the Bauhaus Museum Weimar, which has been in existence since 1995, is being built on the edge of the Weimarhallen park, directly opposite the domineering architecture of the former Nazi “Gauforum.” The architects have countered the historically sensitive location with a glass cube that sits atop a concrete base; it is a minimalist, but self-confident statement; inside, it is broken up into a complex interplay of five different levels.

With the Bauhaus Museum Weimar, which will be inaugurated on April 6, 2019, the city of Weimar is getting a new cultural quarter that spans the close of the 19th century and the ambivalent history of Modernism, reaching to the present day. With its 2,250 square meters (ca. 24,000 square feet) of exhibition space (ca. 3,000 square meters [ca. 32,000 square feet] total), the new building will provide sufficient space for a suitable presentation of a representative selection of items from the unique Bauhaus collection of the Klassik Stiftung, with its 13,000 objects and documents. The €22.6 million (ca. $25.6 million) building is financed by the state of Thuringia and the federal government.

The Bauhaus Foundation Dessau has taken on the task of building a museum that will become an international center for new ideas, in the tradition of the unique Bauhaus school of design. The foundation launched this important 21st century construction task in 2015 with an international open-bid competition. In a two-phase process, the 831 submissions were whittled down to a short list of two; in November 2015, the commission was awarded to the Spanish office addenda architects (González Hinz Zabala) from Barcelona.

A “black box,” a hermetic body floating in a glass envelope on the upper floor, contains the display and educational components for the collection, its history and objects. Its counterpart is the transparent ground floor, with a flexible space configuration. As an “open stage,” it offers a diversity of playing areas, consciously intended to have an impact on the surrounding park and the city.

Construction of the Bauhaus Museum Dessau is funded by the German Federal Commission for Culture and the Media, based on a parliamentary resolution, and by the state of Saxony-Anhalt. The €25 million euro (ca. $28.3 million) construction costs are equally divided between the federal and state governments. The city of Dessau-Rosslau has provided the lot. The Bauhaus Foundation Dessau is owner and manager of the project.

New Wing for the Bauhaus-Archiv /Museum für Gestaltung, Berlin in dialogue with Gropius
A new Bauhaus museum building is also being built in Berlin; in 2022 it will be turned over to the Bauhaus-Archiv /Museum für Gestaltung. The building with its characteristic sawtooth roof, designed by Bauhaus founder Walter Gropius and opened in 1979, has reached capacity after steadily growing visitor numbers and additions to the collection. An extension will be built, housing a total of 6,200 square meters (ca. 67,000 square feet) of additional space. The design, by architect Volker Staab, won an international tender competition among 41 selected bidders.

The new building will set an architectural accent, and enter into a dialogue with the striking building by Walter Gropius. The extension will sit in the cityscape with a delicate, five-story glass tower, and a half-timbered section containing the café and museum shop. All the exhibition spaces, covering about 2,000 square meters (ca. 22,000 square feet), are located below a plateau, designed as a new open space and linking to the existing building via a large inner courtyard. After a renovation, the existing building will house the research archive, the library, storage for the collection, as well as event spaces. Construction costs of about €56 million (ca. $63.5 million) will be funded equally by the federal government and the city-state of Berlin.

While the museum is being renovated and extended, the Bauhaus-Archiv welcomes visitors at the temporary bauhaus-archiv /museum für gestaltung, the temporary location in Berlin’s Charlottenburg district. The current exhibition offers insights into the future and the past of the museum and archive.