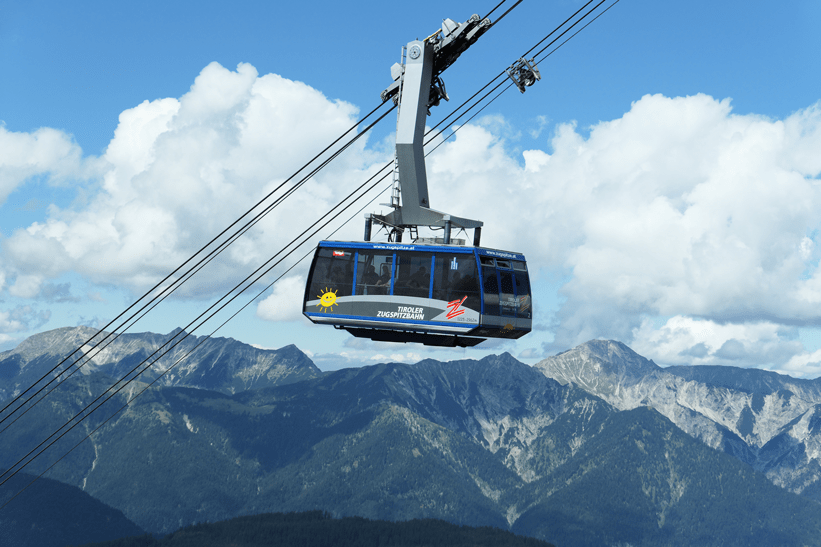 Though the history of cable cars used for conveying materials goes back to ancient times in Japan and India, early aerial tramways created to carry passengers to mountain peaks were built in the first part of the 20th century in Spain, Switzerland, Austria and Germany. One such example was built in 1913 by Bleichert of Germany in Bozen (Bolzano), in what was then Tyrolean Austria.

There are now double-decker cable cars which carry up to 200 passengers at a time and cars which rotate so that riders get panoramic views while ascending or descending over steep mountain slopes. One of the 3S cable cars in Kitzbühel, Austria has a glass floor so that passengers can get a direct view of the harrowing 1312 foot drop below. But the classic Alps picture postcard images up through the mid-20th century typically portray a small, sometimes colorful cable car suspended over a snowy mountainside, often climbing its way toward a mountain peak resort where tourists could enjoy skiing, tobogganing, hiking, restaurants and accommodations.

Germany
The world’s oldest original operating aerial tramway is the Predigtstuhlbahn in Bad Reichenhall, Bavaria. This system was planned in 1926-27 with the aim to make Bad Reichenhall more popular as a beach resort and spa. Constructed in 1927-28, the cables connect to three monumental concrete columns between the valley and mountain stations. The cable car climbs 3740 ft over a distance of 7808 ft at 11mph. The route’s highest point above the ground is 591 ft. Remarkably, the original 1928 suspension cable is still in use.