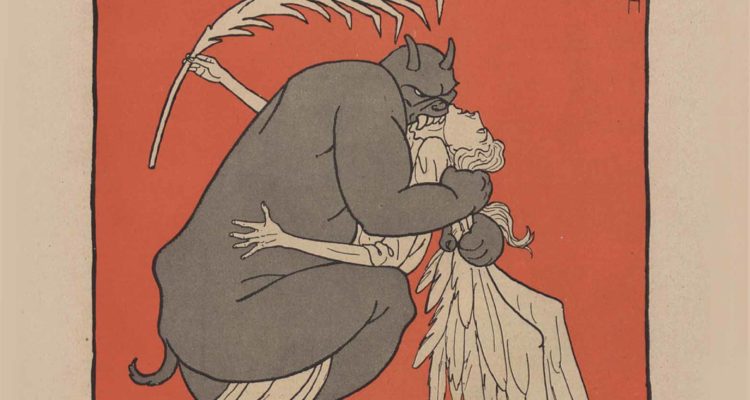 125 Years ago, the Red Bulldog Started Biting
By Robert A. Selig

Woe to her or him whom the Red Bulldog identified as a target. His humor bit where it hurt, and its bite was deep. He showed no mercy to bigoted clergy of all faiths, to class conceited nobility, to boastful militarism, or to the German Spiessbürgertum (German Philistines), whose narrow-mindedness found fault with anyone and anything that did not pass their test of smug self-righteousness as it appeared to the ferocious Red Bulldog. The Simplicissimus, a weekly German satirical newspaper that began publishing in April 1896, thrived in the days prior to World War I. Authorities dreaded the day the next issue hit the newsstands, yet only a single issue, in 1898, was ever confiscated. The editor had to flee abroad as authors and artists of the cartoon were prosecuted and fined for L´ese Majest`e, for lampooning, and thus insulting, Emperor Wilhelm II.

But we are getting ahead of ourselves. Let’s begin by looking at who is behind the Simplicissimus and the aggressive Red Bulldog. Born in Antwerp in the Netherlands into a well-off family of industrialists in 1869, Albert Langen, the founder of the Simplicissimus, grew up in Cologne, where he trained for clerical work in his parents’ company. Upon turning 21 in 1890, Langen, the second son and third of four children, left the company and moved to Paris instead because he wanted to become a painter. While living in Paris, Langen made the acquaintance of numerous well-known and influential writers such as Octave Mirbeau and Émile Zola. Independently wealthy, he lived a Bohemian lifestyle from his apartment on the fashionable Boulevard Malesherbes. For a while he considered opening an art gallery, but then he made the acquaintance of the Norwegian author Knut Hamsun (i.e., Knud Pedersen, who went on to win the Nobel Prize for Literature in 1920). Hamsun had submitted his novel Mysterium to the publishing house of Samuel Fischer in Berlin, founded in 1881. Fisher rejected the manuscript, a translation from Norwegian into German, and refused to budge even when Langen offered to pick up the cost of printing.