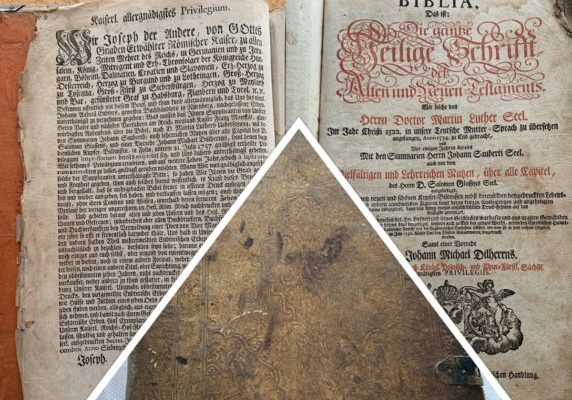 This 250-year-old German Bible, once the cherished possession of a German immigrant family, is now part of the German-American Heritage Foundation’s collection. The cover still features elaborate metal corners and clasps, but the leather straps, which would have held the book closed, are missing. It’s a heavy, leather-bound folio containing the Old and New Testament along with numerous copperplate illustrations that was printed in Nuremberg, now a part of Bavaria, in 1770 by the Johann Andreas Endter’s publishing house. Founded by Georg Endter the Older (1562-1630), the family enterprise printed high-quality copies of Martin Luther’s Bible translation from 1613 to 1792 along with popular calendars, medical and legal texts, and travel reports.

Nuremberg’s geographic location on key trade routes and its statue as an Imperial City made it the center of the German Renaissance in the 15th and 16th centuries, which not only fostered world-renowned artists such as Albrecht Dürer, but also inventors and numerous skilled tradesmen. Increasing literacy and the invention of Gutenberg’s printer press led to a growing demand for books and other printed materials. Nuremberg soon became a printing press hub, and some shops employed as many as 100 workers.