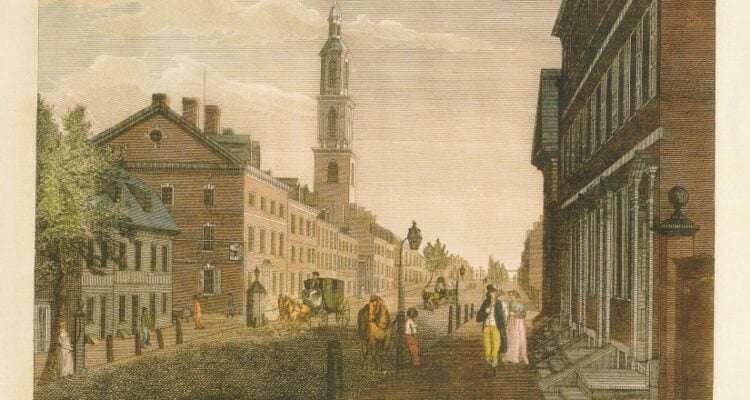 Tracing a mysterious German-American life from Warthausen to Yorktown to Philadelphia and Austerlitz.
By Robert A. Selig

As I was preparing for a research visit to the H. Furlong Baldwin Library of the Maryland Center for History and Culture (MCHC) in Baltimore in the Fall of 2021, I came across this entry in the on-line catalogue: “De la Roche Papers, 1778-1954. MS 1210. Summary: Baron Frederick Franck de la Roche (1757-1805) came to the U.S. with the troops of Lafayette and fought under Rochambeau; the last five pages of his commonplace book describe various skirmishes; no year is mentioned; written in German.” A Revolutionary War journal written in German by an officer under the comte de Rochambeau points inexorably to the Deutsche Königlich-Französische Infanterie Regiment von Zweybrücken (the Royal Deux-Ponts Regiment) which had formed part of the French expeditionary corps of 1780-83. Could those “various skirmishes” be enough for a story for German Life? A quick search on the internet led to entries that identified de/von la Roche as an “aide to the Marquis de Lafayette at the battle of Brandywine, serving until the surrender at Yorktown. He was born in Trier, Germany, and in 1790 he was naturalized, but later returned to Europe, where he was killed at the battle of Austerlitz.” The note that he was naturalized in 1790 meant that he must have returned to the U.S. sometime during the late 1780s, right around the outbreak of the French Revolution. Another internet search led to Greg H. Williams’ The French Assault on American Shipping, 1793-1813, where I found mentions of la Roche as a ship-owner in Philadelphia during the 1790s. And if he was killed in the Battle of Austerlitz in December 1805, (today’s Slavkov u Brna about 100 miles north of Vienna in the Czech Republic) he must have returned to Europe at some point. Intrigued by the transatlantic travels of Herr de la Roche I ordered MS 1210 for my research visit to Baltimore.