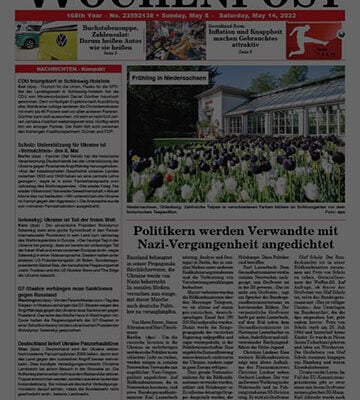 This 168-year-old German-American newspaper published in Warren, Michigan, announced in May 2022 that it was ceasing publication. The reasons cited were the loss of readers and advertisers, as well as the rising costs of production and mailing.

The paper’s roots go back to the Michigan Journal, the first German newspaper in Detroit, that was founded in 1854 by two brothers: August and Conrad Marxhausen. In 1866, they began publishing another weekly, Die Familienblätter, and in 1868 merged the two as the Detroiter Abend-Post. In 1954, the paper celebrated its centennial. Later on, Knut Beth became owner and publisher of the paper, and in 1980 it was renamed as the Nordamerikanische Wochenpost.