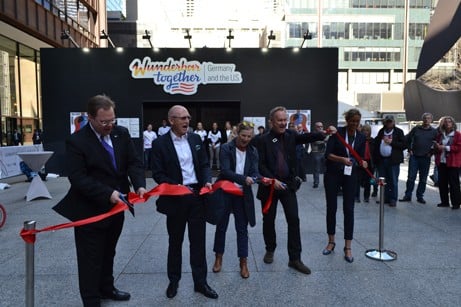 In 1967 The Turtles won a Grammy Hall of Fame award for their popular song entitled Happy Together, which began “Imagine me and you…so happy together.”
In the same vein, Wunderbar Together was the clever theme—similar to the Turtles’ pop song —of a unique nationwide promotion held recently to underscore the special relationship between the United States and Germany. The promotion was celebrated in various cities, but the German American Chamber of Commerce of the Midwest (GACC), the Goethe-Institut, Deutschlandjahr USA and the German Consulate of Chicago, together sponsored by far the largest and longest Wunderbar Together program in the Windy City.

“Wunderbar Together showcases how closely the two countries are linked by heritage, common values and shared interests,” says Corinna Jess, director of Consulting Services & Trade Missions for the GACC. It’s estimated that about 50 million Americans claim German heritage, making it the largest ancestry group in the U.S.