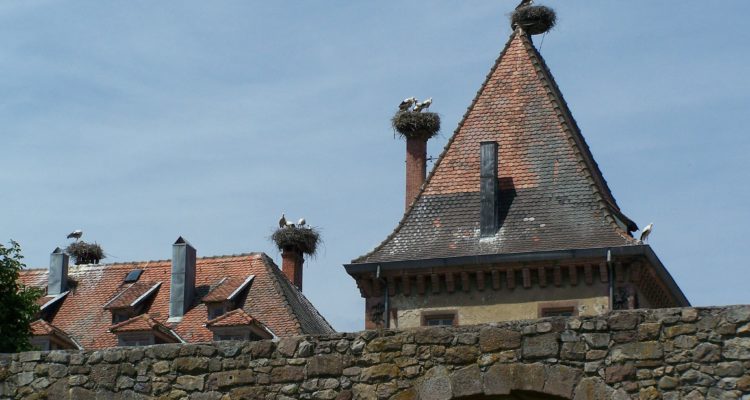 On the Wings of a Stork

Clatter-clatter-clatter. Clack-clack. Clatter-clatter-clack. No, that’s not the cadence of castanets wielded by a Spanish dancer with no sense of flamenco rhythm. It’s the sound of a big bird with a long beak conversing with its mate or chiding its chicks.

I’d never seen a real stork until my first trip to Europe. From the windows of a train speeding through the flat fields of Flanders and northeastern France, between Amsterdam and Paris, I spied a big, long-legged bird, its white feathers tipped with black, bent over and intently picking at something among the stubble. As my eyes became attuned to looking for those strangely shaped birds, I began to see more and more of them as the scenery rolled by.

Then one large bird slowly spread its wings and took off in flight. However, I can confidently report that its beak did not hold a diaper-wrapped infant boy or girl en route to a happy couple somewhere—as parents used to tell their kids when asked where babies came from.

During many years of living and traveling in Europe, I’ve enjoyed the sight of storks foraging in the fields, ambling around on their spindly legs, clatter-chattering among themselves, and gliding through the air to their spiky nests high atop houses and telephone poles. But I have yet to figure out how two big adult storks and up to five chicks can all fit into those nests constructed of tree branches and twigs poking every which way but up.