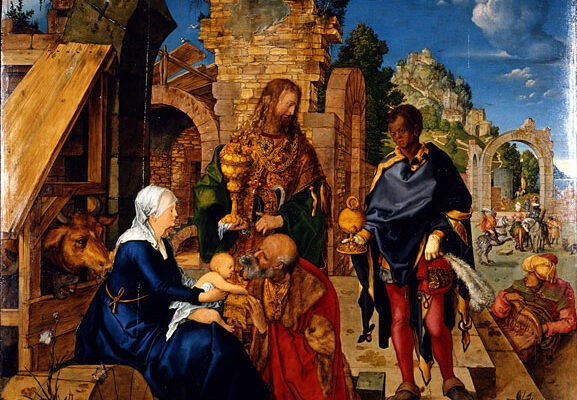 Who were Caspar, MeLChior,  and Balthasar, die Heiligen Drei Könige?

In the time of King Herod, after Jesus was born in Bethlehem of Judea, magi from the east came to Jerusalem, asking, “Where is the child who has been born king of the Jews? For we observed his star in the east and have come to pay him homage.”
By Robert A. Selig

Each Christmas these verses from the gospel of Matthew are read millions of times across the globe to commemorate the anniversary of Christ’s birth. Who were these magi; why did three come; and why do some believe they offered gold, frankincense, and myrrh when they visited Jesus after his birth? Matthew is the only gospel that mentions the magi, but nowhere does he state that there were three of them nor that the magi worshipped the newborn “King of the Jews”. What about this star “in the east” observed by magi coming “from the east”? Shouldn’t the star have been in the west for the magi to end up where—in Bethlehem? Why do some countries celebrate epiphany, the appearance or the manifestation of God in the form of Jesus Christ, depending on where you live, on 6 January, or 5 January, or 7 January of the Gregorian calendar, or on 19 January or thereabouts, in the case of the Eastern Churches. (Eastern Churches follow the Julian calendar, which is 13 days behind the Gregorian calendar, and celebrate Epiphany as a commemoration of the baptism of Jesus in the Jordan River, which according to the Catholic Church’s tradition, is celebrated on the first Sunday after the feast of Epiphany. Whatever date that might be.)

Questions over questions, and we have not even asked who King Herod was, inquired about the size and location of Bethlehem, why Jesus was born in Bethlehem and not somewhere else, or tried to find out about that entity called “Judea”! These are enough questions for half a dozen features that could be pulled from these few lines of the gospel of Matthew. Let’s proceed and seek as Paul Harvey was wont to say…”the rest of the story”…as well as a German connection.